Arduino Nano is a small, complete, and breadboard-friendly board based on the ATmega328. It has more or less the same functionality as the Arduino Duemilanove but in a different package. It lacks only a DC power jack and works with a Mini-B USB cable instead of a standard one. It contains 30 male I/O headers, configured in a DIP30 style. Its pinout contains 14 digital pins, 8 analog Pins, 2 Reset Pins & 6 Power Pins. It is programmed using Arduino IDE, which can be downloaded from Arduino Official site.

Arduino Nano is simply a smaller version of Arduino UNO, thus both have almost the same functionalities. It comes with an operating voltage of 5V, however, the input voltage can vary from 7 to 12V. Arduino Nano’s maximum current rating is 40mA, so the load attached to its pins shouldn’t draw current more than that. Each of these Digital & Analog Pins is assigned with multiple functions but their main function is to be configured as Input/Output. Arduino Pins are acted as Input Pins when they are interfaced with sensors, but if you are driving some load then we need to use them as an Output Pin. 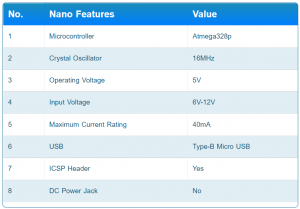 Functions like pinMode() and digitalWrite() are used to control the operations of digital pins while analogRead() is used to control analog pins. The analog pins come with a total resolution of 10 bits which measures the value from 0 to 5V. Arduino Nano comes with a crystal oscillator of frequency 16 MHz. It is used to produce a clock of precise frequency using constant voltage. There is one limitation of using Arduino Nano i.e. it doesn’t come with a DC power jack, which means you can not supply an external power source through a battery.

Keep an eye on our website to avail the –

There are no reviews yet.

Be the first to review “Arduino Nano” Cancel reply

Multifunctional Expansion Board Module for Arduino